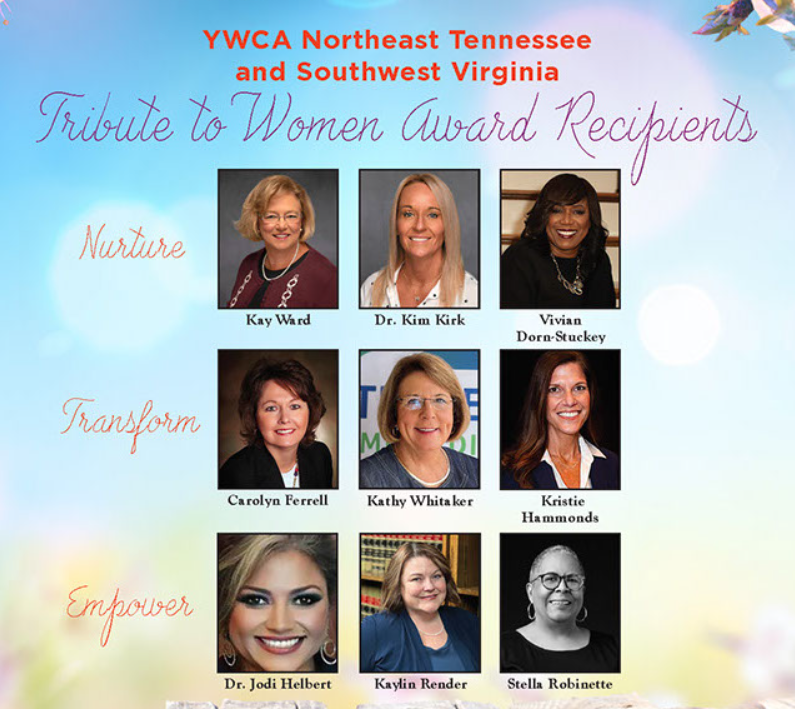 Thank you to Voice Magazine for Women!

Nine exceptional women who strive to improve the quality of life for residents of our region are being honored by the YWCA Northeast Tennessee and Southwest Virginia.

Out of numerous Tri-Cities women nominated by area organizations, nine have been chosen by an independent panel of judges as recipients of the 2022 YWCA Tribute to Women Award. These women work across multiple sectors and were selected for their leadership abilities, demonstrated achievements and positive influence in the region. They will be honored in three categories—Nurture, Transform and Empower—reflecting their impact on their communities.

Due to the ongoing pandemic, the YWCA will be unable to hold their customary annual banquet to honor the 2022 recipients, but several events have been planned. Award recipients will receive a special visit from staff, board members, sponsors, and available media to receive their awards. The YWCA will also hold a virtual award recipient announcement.

“This year marks the 31st year that the YWCA NETN and SWVA will honor nine extraordinary women who nurture, transform, or empower their communities,” said Heidi Dulebohn, YWCA board member. “Please join us in celebrating these remarkable recipients, who are models for those served by the YWCA and its mission to eliminate racism and empower women.”

A champion for at-risk students, Kay Ward began her 27-year tenure with Bristol Tennessee City Schools as a classroom teacher but has spent the past 15 years within their Family Resource Center. As Community and Family Engagement Coordinator, she spearheads and supports initiatives such as the Reading Buddies Program and Be Present! Attendance Challenge. Additionally, she has held leadership positions with groups such as Bristol’s Promise/Youth Networking Alliance, the Poverty Education and Awareness Coalition and Family Promise of Bristol and has served with numerous organizations such as United Way of Bristol, the Northeast Tennessee Commission on Children and Youth, and the Tennessee Department of Education Family Resource Center Advisory Council. Kay is committed to enhancing the opportunities available to students and the community.  Kay was nominated by City of Bristol, Tennessee.

Dr. Kim Kirk did not expect to serve as principal of Tennessee High School during a pandemic. But despite unimaginable circumstances—including the deaths of four students and a teacher—she led her community with wisdom and compassion, motivating faculty and students even as she educated herself about and instituted health protocols, organized memorials and established counseling opportunities for her students and coworkers. Guiding and supporting a school of 1,200 students is a challenge—much more so during COVID. But Kim has always excelled, not only as principal but as teacher, counselor, coach, cheerleader, business professional and mother to the many students who are inspired by her. The continued success of Tennessee High School is evidence of her achievements.  Kim was nominated by Viking Booster Club.

Throughout her life, Vivian Dorn-Stuckey has worked tirelessly to mentor and educate in her community. She is an honors graduate of the University of Arkansas at Pine Bluff, where she received a BS in Business Education. During her time there, she began tutoring at-risk elementary students, a role that would lead to various teaching and mentorship positions at churches, schools, and undergraduate programs in multiple states, including Tennessee. Following graduation, she worked with the Social Security Administration, receiving numerous awards for her service. Vivian continues to utilize her professional expertise by providing workshops on financial literacy. She also mentors young college students and council numerous women as part of her community outreach.  Vivian was nominated by Central Baptist Church.

Vice president of human resources for a company of 430 employees and an early adopter of Bristol’s Promise’s innovative Bristol Connect workforce sustainability program, Carolyn Ferrell is known for her ability to understand the needs of employees and their families and her belief that everyone’s voice should be heard. For this reason, she is often selected to serve on work and community boards and in numerous leadership positions. Her roles have included president of the Chamber of Commerce Bristol TN/VA and the United Way of Bristol and chairperson of Sullivan County NETWORKS Partnership and the University of Tennessee Center for Industrial Services (UTCIS) Advisory Council. She is also active in volunteering in the community and through her church.  Carolyn was nominated by Bristol's Promise.

Over 46 years Kathy Whitaker has grown the First Tennessee Area Agency on Aging and Disability (FTAAAD) into an organization that administers $6.2 million over 16 programs to house, feed, transport, and protect seniors. She helped create the Annual Conference on Aging and the First Tennessee District Senior Olympics and has served on the boards of the Southeastern Association of Area Agencies on Aging (SE4A) and the National Association on Area Agencies on Aging (N4A). In 2005 she was a delegate to the White House Conference on Aging and in 2019 was honored by the Tennessee General Assembly and Governor Bill Lee. She continues to develop new avenues to meet the needs of our area’s older adults and adults with disabilities.  Kathy was nominated by First TN Development District.

In her role as CEO of Frontier Health, Kristie Hammonds couples passion with integrity. She has been instrumental in supporting school-based mental health services and a recent Regional School Mental Health Summit and has worked with county and city leaders to address the expansion of substance abuse services to combat the opioid epidemic. Among many leadership positions, she currently serves on the STRONG Accountable Care Executive Committee, the Bright Start TN Steering Committee, the Regional Recovery Ecosystem Advisory Council, and as president-elect of the Tennessee Mental Health Association. Her continuing goal is to develop connections with and educate community leaders and legislators on policy, rights, service development, and funding for those in need.  Kristie was nominated by Frontier Health.

Dr. Jodi Helbert is passionate about serving people and promotes on a daily basis the need to support others and lend assistance to the impoverished, socially displaced and abused. She developed the Bachelor of Social Work program at King University, where she empowers her students to embrace community involvement through various support opportunities. Jodi holds multiple certifications, including a PhD in social work. She is a clinical psychologist, an honorary colonel in Kentucky, a reverend and a community leader and has served on various boards and with community development programs such as the Paint It Purple event at King University to promote domestic violence awareness and No-Freeze November, which distributes blankets, scarves and other items for winter warmth. Jodi was nominated by DPPS Asset Management Inc.

In 2005 Kaylin Render joined the district attorney’s office as a STOP Domestic Violence prosecutor. Since then, she has progressed from prosecuting simple domestic assault cases to handling complex cases of rape, kidnapping and first-degree murder. Through her work, she has also become involved with other agencies and groups that deal with domestic violence cases, such as Branch House Family Justice Center, Abuse Alternatives and the Sexual Assault Response Team (SART). She gives presentations to civic organizations and churches and conducts trainings for law enforcement agencies in domestic violence investigation. Kaylin’s commitment has been recognized with awards from organizations such as the Front Line Domestic Violence Task Force for her dedication and service to victims of domestic violence.  Kaylin was nominated by District Attorney General, 2nd Judicial District.

Stella Robinette has spent several decades working with youth in the Kingsport area and has personally mentored approximately 200 children, encouraging them to excel in school and beyond. To help, she created the concept of a Dream Book, where young people put on paper their plans and dreams for adulthood. And in 2008 she started the organization Helping Our Potential Evolve (HOPE). Stella has received multiple recognitions, including a Community Leadership Award from the Sullivan County Sheriff’s Office, a Woman of Impact designation from the Kingsport Junior League and Volunteer of the Year from the United Way of Greater Kingsport. In 2014 the mayor of Kingsport recognized Stella and her organization for their impact in the city.  Stella was nominated by Help Our Potential Evolve (H.O.P.E.).

Thank you to our sponsors for supporting the 2022 Tribute to Women program.  Our current sponsors are:  The United Company Foundation; Ballad Health; Food City; Eastman Credit Union; BTES; Bristol Herald Courier; and Eat My Art.  The support of our sponsors ensures continued recognition for women in leadership and mentoring positions in northeast Tennessee and southwest Virginia.  We will announce additional sponsors as they are added.